Home » News » Industry News » What is a bottle jack？

What is a bottle jack？

Bottle jacks are ubiquitous in our daily life and work, and some relatively large or heavy equipment is in great demand for them.But for some people, it is still not clear what a jack is? And how to choose the right jack? This article answers these questions in detail.

This article contains the following:

The meaning of bottle jack

Advantages and disadvantages of bottle jacks

1.The meaning of bottle jack

Bottle jack is the simplest lifting equipment with small lifting height (less than 1m). It has two types: mechanical and hydraulic. There are two types of mechanical jacks: rack type and screw type. Due to their small lifting weight and laborious operation, they are generally only used for mechanical maintenance and are not suitable for bridge repair. The hydraulic jack has compact structure, stable operation and self-locking effect, so it is widely used.

(1) Screw Jacks: Screw jacks are mechanical devices that apply the principle of screw threads. They are mainly used for maintenance or structural relocation from the foundation of a building. Use a series of jacks and then wooden temporary support structures. Repeat this process until the desired height is reached. Screw jacks can be used to lift beams that have been installed or installed with new structural beams. On the top of the jack is a cast iron circular pad on which the jacking column is placed. The liner moves independently of the screw jack, so it does not rotate as the metal rod rotates the tip threaded rod.The pantograph screw jack usually uses mechanical advantages to allow humans to lift the vehicle only by hand. The telescopic screw jack of an electric car is powered by 12 volts of electricity supplied directly from the car's cigarette lighter socket. Electric energy is used to power these car jacks for automatic lifting. The electric jack can be operated easily by the driver.

(2) Hydraulic Jacks: Hydraulic jacks are usually used for workshop operations, not as emergency jacks carried by vehicles.The liquid used by the hydraulic jack is incompressible and is forced into the cylinder through the pump plunger. Oil is used because of its self-lubricity and stability. When the plunger is pulled back, it sucks oil from the oil storage tank into the pump cavity through the suction check valve. When the plunger moves forward, it enters the cylinder to push oil through a discharge check valve. The suction valve ball is located in the chamber and opens with each suction of the plunger. The discharge valve ball is located outside the chamber and opens when oil is pushed into the cylinder. At this time, the ball in the suction chamber is forced to close, and oil pressure is formed in the cylinder.

Floor jacks usually include casters and wheels, which can compensate for the curvature of the lifting pad. The mechanism provides a low profile when folded for easy handling under the vehicle, while allowing considerable extension.

(3) Pneumatic Jacks: Pneumatic hydraulic jacks are hydraulic jacks that are actuated by compressed air, such as air from a compressor-instead of human work. This eliminates the need for the user to drive the hydraulic mechanism, thereby saving work and possibly increasing speed. Sometimes, such jacks can also be operated by conventional hydraulic actuation methods, thereby maintaining functionality even if the compressed air source is not available.

(5) The farm bottle jack: It also known as the railway jack, was invented in 1905. It consists of a steel beam with a series of equally spaced holes along its length and a manual mechanism that can be moved from one end of the beam to the other by using a pair of climbing pins. 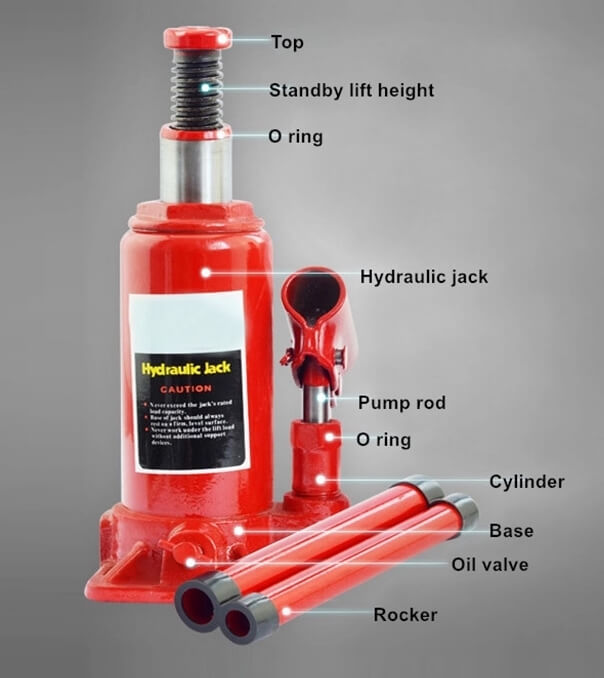 3. Advantages and disadvantages of bottle jacks

Disadvantages of screw bottle jacks: But this type of jack generally has a relatively heavy weight, low transmission efficiency and slow lift. Some screw jacks are directly rotated with the original car wrench

(2)Advantages of hydraulic bottle jacks: The lifting and lowering speed is very fast, and the maximum load-bearing capacity is generally very large, about 3 tons. It can be seen in most auto repair shops.

Disadvantages of hydraulic bottle jacks: However, the volume of this type of jack is much larger than the above two types of jacks, and it is inconvenient to carry, so basically it will not appear in the toolbox of the family car. If necessary, you can only purchase it separately.

It can be seen from this that we need to choose suitable bottle jacks to operate on different occasions. By understanding the advantages and disadvantages of different types of bottle jacks, we can clearly distinguish the differences between these types.

And pay attention to safety when using!