English
Home » News » Industry News » How to use a sandblaster cabinet?

How to use a sandblaster cabinet?

A sand blaster is a fantastic tool for preparing parts for operations such as powder coating.  It can remove rust, paint and other surface imperfections. It can also be used for aesthetic purposes, like sandblasting glass in particular designs.

How do sandblasting cabinets work? 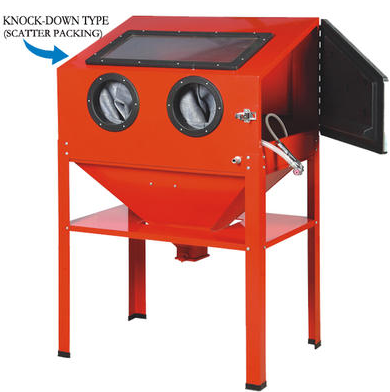 How to use a sandblaster cabinet?

Generally these components are stored separately and assembled when necessary.  The main components are the power head, the nozzle and the siphon air jet.

Insert the nozzle into the power head and secure it.  In this case, using an allen key.

Next, insert the siphon air jet into the power head such that the gasket is visible.

Open the sandblaster and insert the gun into the power head assembly, ensuring that the siphon air jet is still in place.

Secure the connection, in this case using a wrench on the bolt.

Step 3: Attach the Siphon Hose to the Power Head Assembly

Within the sandblasting cabinet, attach the siphon hose to the bottom inlet of the power head assembly. The siphon hose supplies the media (generally sand) to blast.

Step 4: Put Components for Blasting into the Cabinet and Secure Cabinet

Within the sandblasting cabinet, attach the siphon hose to the bottom inlet of the power head assembly. The siphon hose supplies the media (generally sand) to blast.

In this case, turn on the light in the cabinet and turn on the fan. The fan is a separate switch for the room.

Optionally, you could turn the room light off for a better view inside the cabinet.

The power switch on the left side of the cabinet.

Step 7: Insert Your Arms into the Gloves and Position on Foot Pedal

Insert your arms and position yourself so that you have a clear view into the cabinet. Position your foot in the foot pedal mechanism. Once you depress the pedal the media (sand) will blast from the gun.

Pick up the gun and the parts and manually aim where you need to clean.  Keep your strokes smooth and make sure to blast all edges, including the sides.

When finished, turn off the machine, open the cabinet and remove the finished components.

In the reverse of the manner in which you attached the power head assembly, disconnect the siphon hose and remove power head from the gun.

Remove the siphon air jet and then disconnect the nozzle.