How to bleed a porta power jack？

Porta power jack refers to the use of plunger or hydraulic cylinder as a rigid jacking parts of the jack. It has the characteristics of compact structure, stable operation, large supporting force and self-locking.

What is a porta power jack？

The principle of porta power jack

Use method of porta power jack

Notes for use of porta power jack

How to bleed a porta power jack?

What is a porta power jack?

Porta power jack is appicable to the repair of car and truck bodies, the components snap together for quick setups to apply pushing, spreading or pulling force. 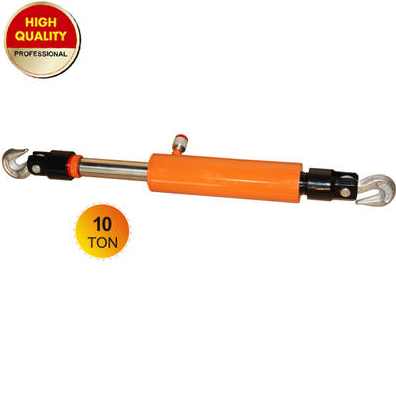 The principle of porta power jack

When the hand lift lever handle, the small piston is driven up, the pump body sealing volume will increase. At this time, because the discharge check valve and the discharge valve closed their respective oil path, so the working volume in the pump body increased to form a partial vacuum. Under the action of atmospheric pressure, the oil in the oil tank will flow into the pump body through the oil pipe and open the suction one-way valve, completing a suction action.

When press the lever handle l, drive small piston moves down, a little oil in the pump body cavity working volume decreases, and then put the oil out, opened the oil discharge valve, the oil and the tubing into the hydraulic cylinder, due to the displacement of hydraulic cylinder is also a seal, so to enter the oil due to affected by extrusion force will promote the piston rises, and heavy jacking work is done. Repeatedly lift, pressure lever handle, you can make the weight continuously rise, to achieve the purpose of lifting.

When the big piston needs to return downward, open the oil discharge valve (rotate 90°). Under the action of heavy weight, the oil in the hydraulic cylinder will flow back to the tank, and the big piston will drop to the original position.

Use method of porta power jack

1) Check whether each part is normal before use, mainly check whether the piston, joint, high-pressure hose and other places leak oil.

2) The provisions in the main parameters should be strictly observed when using, and super high overload should be avoided, otherwise when the lifting height or lifting tonnage exceeds the provisions, the top of the hydraulic cylinder will have a serious oil leakage.

3) If the amount of oil in the manual hydraulic pump is insufficient, it is necessary to add fully filtered hydraulic oil to the pump in order to work.

4) The center of gravity of the weight should be moderately selected. The force point of the jack should be reasonably selected and the bottom should be flat. At the same time, the soft and hard conditions of the ground should be taken into consideration.

5) After the weight is jacked up by the jack, the weight should be firmly supported with supports in time.

6) If several jacks are needed to be lifted at the same time, in addition to the correct positioning of the jacks, attention should also be paid to balance the load of each jack, pay attention to keep the lifting speed in sync, and prevent the lifting object from tilting and causing danger.

8) The separated jack adopts the spring return structure. After lifting, it can be taken out quickly, but the connected hose cannot be used to pull the jack.

9) Since the lifting stroke of the jack is small, the rated stroke shall not be exceeded in use to avoid damaging the jack.

10) Violent vibration of the jack should be avoided during use (such as striking the workpiece with a hammer when the jack is loaded).

Notes for use of porta power jack

3) Porta power jack USES oil as the medium, so the maintenance of oil and equipment must be done well, so as to avoid blockage or oil leakage, which will affect the use effect.

How to bleed a porta power jack？

1. Jack the jack up until the jack's ram piston is fully extended. The ram piston is the portion of the jack which rests just below the object to be lifted.

4. Reinsert the filler plug into the jack.Repeat the above steps until air can no longer be heard escaping from the jack to complete the bleeding process.

Through this article, you can clearly understand what porta power jacks are and how to bleed a floor jack.