What is floor jack?

How to use a floor jack?

Why we should bleed a floor jack?

What is floor jack?

Floor jack is with rigid jacking as working device, through the top bracket at the top of the small trip in light and small lifting weight lifting equipment, is a kind of widely used in load weight of vehicles or mobile devices supporting equipment and adjust the equipment level of an important hydraulic components, it is mainly used in mines, transportation and other departments as vehicle repair and other lifting, support, etc. 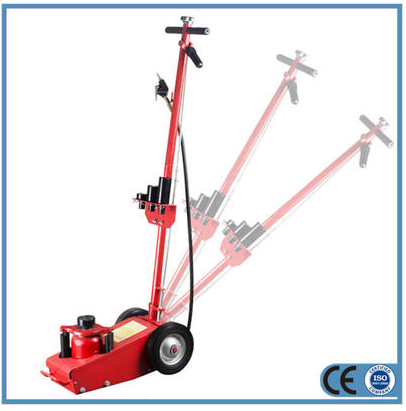 How to use a floor jack?

1, All parts must be checked before using the floor jack.

2, The main parameters should be strictly observed when using, avoid super overloading, otherwise when the lifting height or lifting tonnage exceeds the requirements, the top of the cylinder will have a serious oil leakage.

3, If the amount of oil in the manual pump body is insufficient, you need to add to the pump should be fully filtered after the hydraulic oil to work.

4, Please refer to the operation manual of electric pump.

5, The center of gravity of the weight to choose moderate, reasonable choice of the force point of the jack, the bottom to pad flat, at the same time to consider the ground soft and hard conditions, whether to liner tough wood, placed smoothly, so as to avoid weight subsidence or tilt.

6, After the hydraulic floor jack lifts the weight, the warehouse jack should timely use the support to support the weight firmly, it is prohibited to use the jack as a support. If heavy objects need to be supported for a long time, please choose.

7, If several floor jacks need to be lifted at the same time, in addition to the floor jacks should be placed correctly, also should use multi-jack shunt valve, and the load of each floor jacks should be balanced, pay attention to keep the lifting speed synchronization. It is also necessary to take into account the possibility that the ground may cave in due to uneven weight to prevent the weight being lifted from tilting and causing hazards.

8, When in use, first connect the quick joint of the manual pump to the top, then select the right position, tighten the oil discharge screw on the oil pump, and then it can work. To make the piston rod drop, loosen the hand pump wheel slightly counterclockwise and the cylinder will be unloaded. Then the piston rod will drop gradually. Otherwise it will be dangerous to fall too fast.

9, Separate jacks with spring return structure can be quickly removed after lifting, but do not use the connected hose to pull the jacks.

10, Because the floor jack lifting stroke is small, the user must not exceed the rated stroke when using, so as not to damage the hydraulic floor jack.

11, Violent vibration of floor jack should be avoided during use.

12, Not suitable for use in workplaces with acid, alkali and corrosive gases.

13, The user should check and maintain regularly according to the use condition.

Why we should bleed a floor jack?

A floor jack uses pressurized fluid to cause the jack's lift surface to rise. Over time, air can enter the jack's fluid reservoir, particularly if the jack's seals are not functioning properly. Operating a jack with air in its system is dangerous, as the air within the reservoir can lead to sudden failure of the jack, particularly when the jack is supporting a heavy load. The most common symptom of air in the floor jack is a spongy feel when the jack is used. Also indicative of the presence of air is a jack that slowly lowers itself. When either occurs, it is time to bleed the air from the jack.

1. Jack the jack up until the jack's ram piston is fully extended. The ram piston is the portion of the jack which rests just below the object to be lifted.

4. Reinsert the filler plug into the jack. Repeat the above steps until air can no longer be heard escaping from the jack to complete the bleeding process.

Through this article you can know how to bleed a floor jack.