Siphon blast cabinets and pressure blast cabinets are the two main types of sand blasting cabinets that exist on the market. The two have some distinct differences in how they operate.

Types of sandblaster and how it works

A pressure blast cabinet uses a pressurized vessel (like a pressure pot) filled with blast media, which is then forced through a blast nozzle. Pressure blasting is significantly faster and more aggressive than suction blasting. 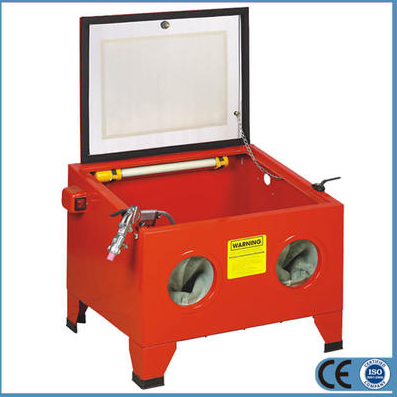 All sandblasters work on roughly the same principles: finely ground silica sand is used to clean and abrade a surface, typically metal, of any rust, paint or other unwanted surface materials. This is done by means of an air-powered pressure gun that fires out the sand at high velocity to impact with the intended surface. All sandblasters use said pressurized gun, which has a ceramic barrel or interior coating to prevent the sand from eroding it over time. The exact process by which the sand is introduced to the gun differs.

Types of sandblaster and how it works

Basically speaking, there are three types of sandblaster.

The first of the three types of sandblaster cabinet is the gravity-fed model. There are three basic parts to this model: an air compressor or pressurized air tank, a hand-held pressure gun with air hose and a hopper on top of the gun. The hose connects to the air tank, and the hopper is filled with silica sand. When the trigger of the gun is depressed two things happen. First, compressed air fires through the gun as long as the trigger is held down. Second, an opening at the top of the gun into which the hopper is connected opens. The air flowing through the gun and the force of gravity pulls the sand down through the gun and out the barrel.

Pressure blasters are more often used by commercial organizations, as they are significantly easier to use than the other models but also cost more to use. They consist of a large canister containing silica sand under high pressure. This is a bit similar to the concept behind an aerosol can. A sandblasting gun, usually a two-handed model, is connected to the port at the top of the canister by means of a specialized hose that can withstand the abrading affects of the sand. When the trigger of the gun is pulled, both the air and sand are forced out as a single entity. This means cleanup and maintenance is practically nonexistent, but there are some drawbacks. Because the sandblaster cabinet canisters are fully enclosed, the sand that they fire out cannot be collected and reused. Also when the canister is empty, it must be swapped out for another, or an entirely new one must be purchased, both at significant cost.

A siphon sandblaster is the model you're most likely to find in any handyman's possession. It can be used to clean and strip large surfaces and is moderately cheap. It consists of three parts. It has a sandblasting gun with two separate hoses, one connected to the bottom of the handle and the other connected the underside of the barrel. It has a normal pressurized tank or air compressor. It also has a reservoir of loose sand. This takes the form of a large bucket or container of some kind. The air hose of the sandblaster cabinet gun is connected to the compressor, while the other hose is connected to the underside of the separate sand reservoir. When the gun is fired, the air serves to create a suction, which pulls the sand from the reservoir up the hose and into the gun to be fired out the barrel. As a result of this system, the sand that is fired out the barrel can be collected and placed back in the reservoir to be reused again and again.